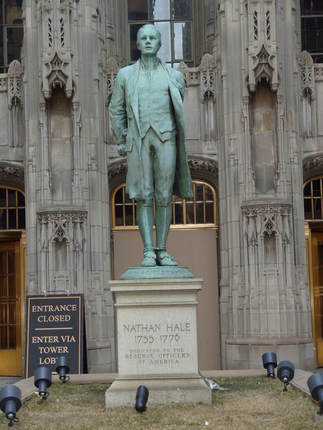 Source: https://www.flickr.com/photos/scmikeburton/2336000370
Nathan Hale was not only a patriot.  He graduated from Yale University at 18 and became a teacher, a job he clearly loved.  As a young man, he advocated for the equality of women and argued against slavery, both positions unpopular at the time.
He was widely remembered by friends as intelligent, outgoing, compassionate – and even handsome.  Some stories say he played an early version of football.

What he is most remembered for however, are his deeds in the Revolutionary War.  Nathan was asked to join George Washington’s first Army Ranger Corps in 1776, and volunteered to enter New York City in disguise, to observe the movements of the British troops.  Having accomplished his mission, he was trying to leave New York when he was recognized and captured.

At his execution, he made a short speech, which was later recorded by a British officer who was moved by the young man’s courage.  “I only regret,” Nathan Hale began, “that I have but one life to give for my country.”  He was only 21 years old.  He never wrote anything important, never owned any property, never married or had children, never fought in a battle and who failed in his final mission.  But in the final moments of his life, Nathan Hale gave his country a motto by which we can all live.

Nearly 170 years after his death, the West Allis community decided to honor the young men who sacrificed their lives on the battlefields of World War II by naming the school after Nathan Hale, an extraordinary American whose service changed history.
​
​Be proud today and everyday, that you attend a school named after such a great American.
Special Thanks to Mr. Ellery for this history of Nathan Hale.